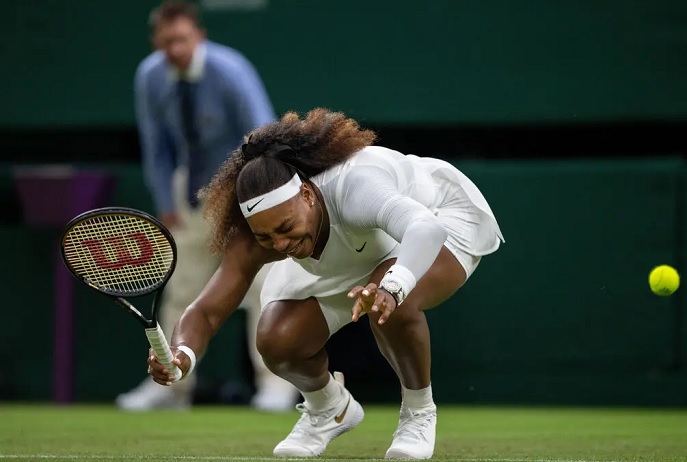 “I was heartbroken to have to withdraw today after injuring my right leg,” Williams wrote in a post on Instagram, adding: “Feeling the extraordinary warmth and support of the crowd today when I walked on — and off — the court meant the world to me.”

It was poignant to see Williams, one of the great champions in any sport, in pain and in tears on the famous patch of grass where she has often triumphed through the years. She has won seven Wimbledon singles titles, six women’s doubles titles and one mixed doubles title on Centre Court.

Tuesday brought her earliest exit in singles at the All England Club. Her coach, Patrick Mouratoglou, said in a text message that the injury was to the “top of the hamstring.”

Williams started her match against Sasnovich with her right thigh taped, just as it was during the French Open early this month in Paris.

We're heartbroken for you, Serena.

Our seven-time singles champion is forced to retire from The Championships 2021 through injury#Wimbledon pic.twitter.com/vpcW1UN78s

But Williams still began in impressive fashion Tuesday, ripping second-serve returns with ruthless precision to take a 3-1 lead under the closed roof on Centre Court.

But while serving in the next game at 15-15, Williams slipped as she changed direction. After losing the point, she stopped for several seconds, staring down at the grass. She went on to lose her serve and then walked gingerly to her chair, where she was examined by a trainer.

Williams left the court for treatment and returned several minutes later, limping slightly. She resumed play, but struggled to move as Sasnovich held serve to make the score 3-3. Williams, in obvious distress, began crying at the baseline as she prepared to start her next service game. After gathering her belongings, Williams limped off Centre Court, her accreditation badge dangling from her hand, and performed one of her traditional pirouettes. But after a final wave to the crowd, she stumbled again as she reached the passageway behind the most famous court in tennis, where she last won the singles title in 2016. Though she stayed on her feet, she needed help to walk into the clubhouse.

Williams, 39, has been chasing a record-tying 24th Grand Slam singles title since returning to the tour in 2018 after the birth of her daughter, Olympia. Seeded sixth at Wimbledon, she was still considered a favorite for the title by many bookmakers, along with the world No. 1, Ashleigh Barty.