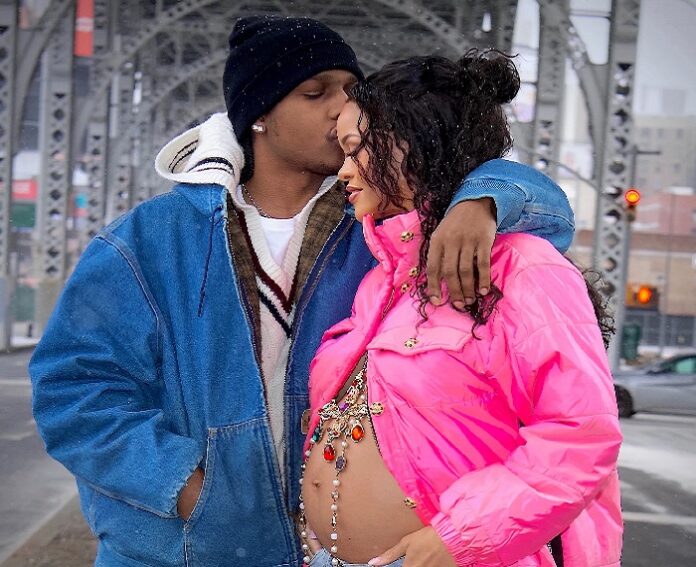 Since Rihanna shocked (and delighted) fans with a surprise pregnancy in January, the ‘Self-Care’ singer has been embracing her pregnancy bump by way of her fashion choices.

The singer, who is set to become a first-time mother with rapper partner A$AP Rocky, spoke to Refinery29 about challenging stereotypes when it comes to dressing while pregnant.

‘Right now I’m really into pushing the idea of sexy,’ she said.

She added: ‘When women get pregnant, society tends to make it feel like you hide, hide your sexy, and that you’re not sexy right now [but] you’ll get back there and I don’t believe in that s***.

‘So I’m trying stuff that I might not have even had the confidence to try before I was pregnant. The strappiest, the thinnest, and the more cut-outs the better for me.’

The Fenty Beauty founder said this in reference to how she wants women to ‘feel represented’, ‘confident’ and ‘like they belong’ in her Savage x Fenty stores, which have opened in five locations – Los Angeles, Las Vegas, Philadelphia, Washington D.C. and Houston.

Rihanna, whose lingerie offering is an ode to her brand’s empowering sensibility, explained: ‘You know, we actually cast all of the mannequins off of real people.

‘I wanted to make sure we included as many different body types as possible because you don’t get to see curvy women and curvy men in this aspect.’

Emphasising the significance of this, she said it ‘was important because everyone wants to feel seen and sexy’. During a recent interview with E! News at her Fenty Beauty and Fenty Skin event, the singer recalled keeping her pregnancy a secret from her friends and the signs they picked up on.

rihanna welcomed by sephora workers on 34th street last night. this is so cute and wholesome pic.twitter.com/i9S7qCGfOH

‘It was harder for me to keep it from my posse, because they’re around me, they know my habits,’ she said.

‘They’re like, “You don’t want something to drink? You’re not smoking?” And I’m eating all the things I’m not used to eating. They know I hate sweets and I’m all of a sudden asking for cookies and donuts. But finally, I just had to let it all out, and they were all shocked, of course, as the world was shocked as well.’

Now, the ‘Diamonds’ singer, who’s expecting her first child with A$AP Rocky, has shared a series of photos on Instagram spotlighting her bump. In signature Rihanna style, she wore a cool, effortless oversized Varsity T-shirt offset with a colour-block design for her latest photo.

As for her caption: ‘How the gang pulled up to black history month.’

In one photo, Rocky embraces his partner and kisses her forehead.

It’s unknown when the soon-to-be-parents are expecting the arrival of their little one, nor what the child’s sex will be.

On January 26, a video of Rihanna shopping at a Sephora cosmetics store in Manhattan, New York City surfaced on Twitter, leading some to speculate that she was pregnant.