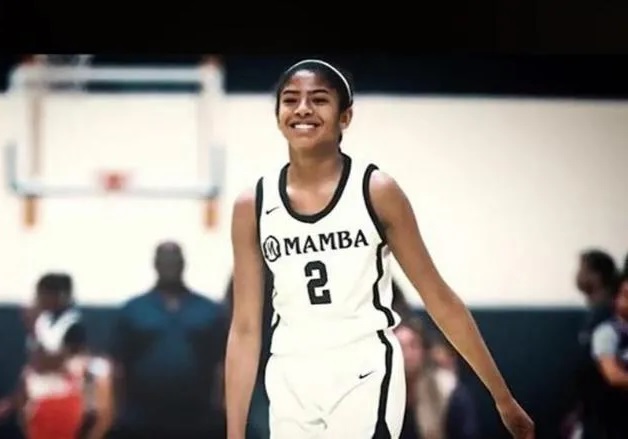 Gianna dreamed of attending the University of Connecticut

The youngster sat courtside with her family during UConn’s game against UCLA in 2017. After the game, GiGi stopped by the locker room where she talked with the players of her dream school The UConn Huskies memorialized Gianna after she passed away in a helicopter crash alongside her father. The team draped her jersey number (#2) and a bouquet across one of their benches during one of the games. “Mambacita is forever a Husky,” the team tweeted.

Gianna was a great big sister

Vanessa Bryant told attendees at Kobe and Gianna’s memorial that she could always count on her daughter to do the right thing. “She was the most loving daughter, thoughtful little sister, and silly big sister,” Vanessa shared. “She often helped to carry the littles’ baby bag and playing with them, and she loved helping with Bianka and Capri. Bianka loved going to the playground, swimming, and jumping on the trampoline with Gigi.”

Vanessa revealed her daughter spoke and wrote Mandarin and understood Spanish in addition to speaking and writing English. “Gianna made us all proud and she still does,” Mrs. Bryant said at her daughter’s memorial.

She was right in the front row when he dropped 60 points against the Utah Jazz, giving the celebrated career the perfect retirement it deserved.

She was nicknamed “Mambacita” by her fans

Gianna Bryant was born on May 1, 2006 and her father fondly called her Gigi. Her fans also nicknamed her “Mambacita” as a play on words to her father’s famous “Black Mamba” moniker. She was the “son” everyone wanted Kobe to have

She was determined to carry her father’s legacy and was “fully committed” to basketball. In Jimmy Kimmel Live interview, Kobe spoke about his daughter’s passion for the game. “The best thing that happens is when we go out and fans would come up to me and she’ll be standing next to me,” Bryant said, “and they’ll be like, ‘You’ve gotta have a boy, you and V gotta have a boy. You gotta have somebody to carry on your tradition, the legacy.”