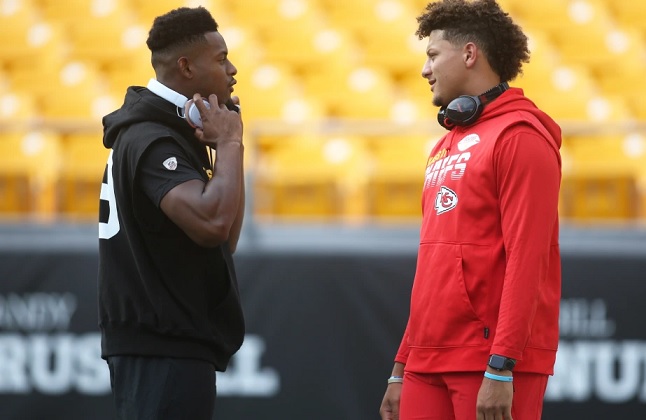 The Kansas City Chiefs have a new wide receiver in the building and members of the team have epic reactions to the signing. After a quiet start to the 2022 NFL free agency period, the Chiefs landed WR JuJu Smith-Schuster. The team had shown interest in the former Pittsburgh Steelers wideout when he was a free agent back in 2021, but he opted to return to the Steelers for another year.

This time around they were able to lure Smith-Schuster away and add another target for QB Patrick Mahomes. Mahomes was the first to react to the signing, taking to Twitter to share his excitement for his new teammate.

“Turn me up brotha,” Mahomes wrote, quote-tweeting Smith-Schuster’s announcement that he’d signed with the team. Chris Jones didn’t wait long to get in on the action. In fact, he said that this was part of the plan all along.

“Corvette Corvette” It was all part of the plan! pic.twitter.com/9L2snrpCc7

JuJu Smith-Schuster replied Patrick Mahomes with another tweet and fans are happy to see that he is already blending in with his new teammates.

Can’t wait to get after it my boy! https://t.co/fKjuFxqhAf

It sure would seem that the Chiefs had plans for Smith-Schuster all along. In 2017, Brett Veach said he attempted to acquire Sammy Watkins in a trade. Watkins ended up with the Los Angeles Rams via trade and a free agent the following year.

Veach never came off his desire to add Watkins and signed him as a free agent in 2018. It would seem that Veach was similarly persistent with Smith-Schuster here. If Mahomes and Jones’ excitement is any indication, it’s sure to be a popular move in the locker room for Kansas City.